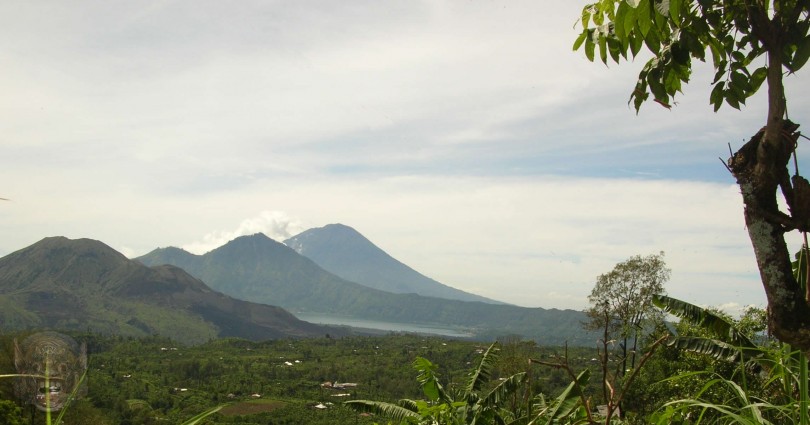 The Kintamani area is located in the Bangli district. Its altitude averages 1500 meters. It was formed between 30,000 and 10,000 years ago. Two enormous volcanic eruptions created an hugh caldera with a diameter of 10 km by 13 km. Mt. Batur as we know it today was formed in 1917; the volcano is still active with numerous subsidiary vents around its flanks. Measured from the floor of the caldera it rises to a height of ca. 700 meter (1,717 meter / 5,633 feet above sea level).

Best time to visit the area is short after sunrise. During the mornings the view in general is clear and wide.
Past noon the area usually gets foggy and rainy. Around the caldera of the Batur volcano and along the shores of the crater lake are some traditional villages.

At the highest rim are the villages of Kintamani, Batur, Buanakerta and Penelokan. The views are great here. Penolokan has a lot of commerce. The souvenir sellers here are very persistent. So be prepared if you go there!

+ read more about the Batur volcano

On the shores of the lake are some villages. Trunyan, Toyabungka, Kedisan and Dukuh. Their culture is traditional. with ancient rites and customs. Here live the Bali Aga. They are the original inhabitants of Bali.

The Ulun Danu temple of Batur is dedicated to the goddess of lakes and rivers. The name of this goddess is Dewi Batari Ulun Danu. It is one of the most important temples of Bali.

Mount Penulisan has an altitude of 1746 m. It is the second highest point of the caldera. The mysterious Pura Tegeh Koripan is the highest and probably also the oldest temple of Bali.