North Bali consists mainly of the district of Buleleng. In this part of Bali you will find some very interesting places to visit. Singaraja is the main town of the Buleleng district. Once it was the former colonial capital of Bali. Close to Singaraja one can find the secluded tourist resort of Lovina Beach. The most well known places in North Bali are Singaraja, Lovina, Banjar Gitgit, Sembiran, Sangsit, Air Sanih, Sangsit, Pemuteran, Menjangan and Seririt. North Bali can easily be reached from the South of Bali (Kuta/Sanur) via various scenic routes, with an average travel time of 3 hour by car depending on the amount of traffic on the road.

Places of interest in North Bali

The northern part of Bali, Buleleng, is sheltered by the mountains that divide Bali from east to west. Due to this for a long time, the northern region has been isolated from the rest of Bali. This accounts for the fact that North Bali still has its own, typical rites and customs. Also called ‘the other side of Bali’, North Bali is an interesting destination for those who love authentic culture and pristine nature with tranquil, rural surroundings.

Singaraja is centrally located at the north coast and is the main town of the Buleleng district. Once, Singaraja was the colonial capital of Bali. In the harbor district, one can still find a number of buildings that remain from the colonial times. There is a lively night- and morning market that is certainly worth visiting. Several banks and ATM’s can be found here as well.

The Royal Palace of Singaraja, Puri Agung Buleleng, is one of the most popular destinations for tourists visiting North Bali. Here the descendants of the old kings of Buleleng still live.

+ Read more about the Royal Palace of Singaraja

The Gedung Kirtya is located close to the Royal Palace. This library annex museum collects, copies and preserves thousands of lontar (palm leaf manuscripts), “prasati” (transcriptions on metal plates) and books which deal with various aspects of human life, such as religion, architecture, philosophy, genealogy, homeopathy, “usada” (medical manuscripts), black magic, and so on, in the Balinese, Kawi (old Javanese) and the Dutch, English and German language.

Jagaraga in the Sawan district is famous for its gamelan gong factories. The hectic ‘gong kebyar’ gamelan music, as can be heard in Bali everywhere, was invented in Jagaraga in 1915 and from there spread over all of Bali.

Lovina Beach is the name for a number of beaches with a total length of approximately 12 km, located just west of Singaraja and within easy reach of most of Bali’s natural and cultural attractions. The beaches of Lovina belong to the fisherman’s villages of Pemaron, Tukadmungga, Anturan, Kalibukbuk, Kaliasem, and Temukus. Lovina beach especially got well known because of the hundreds of dolphins that visit the coast every morning around sunrise. + Read more about the beaches of Lovina in North Bali.

Convenienlty situated in central Lovina close to restaurants and the beach is Hotel Rambutan. There are two swimming pools nestled in the garden. All rooms and villas of Rambutan are set in a large tropical garden, with Rambutan, Coconut, and Guava trees.  Give it a try when you plan to visit Lovina! Click the picure below to check out their website, https://rambutan.org. 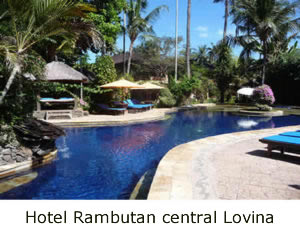 Air Sanih is located at the north coast east of Singaraja. It has cold water springs with natural basins. The cold springs are especially frequented by local Balinese; however, it has also become an attraction for tourists. There are several hotels and restaurants in the area.

Banjar lies half way between Singaraja and Seririt. In the Banjar area are the popular hot springs ‘Air Panas’ which are located in a beautiful tropical garden amidst the jungle. It has several basins and the water is of a very agreeable temperature of 37 degrees Celcius. Another attraction of Banjar is the Buddhist monastery Vihara, where one can find a miniature replica of the famous Borobudur temple of Java.

Menjangan and Pemuteran can be found in the northwest of Buleleng. Here at Menjangan Island, one has the opportunity for snorkeling and diving in crystal clear water with hectares of colorful coral gardens. Close to the village of Pemuteran lies the Pulaki temple which is famous for its colony of monkeys who live there.

Seririt is the third largest town of Bali and once it was a commercial center in North Bali. Nowadays it is a dusty and sleepy town, however with a lively night market. You will pass Seririt on your way to Pemuteran and Menjangan Island, coming from Singaraja/Lovina.