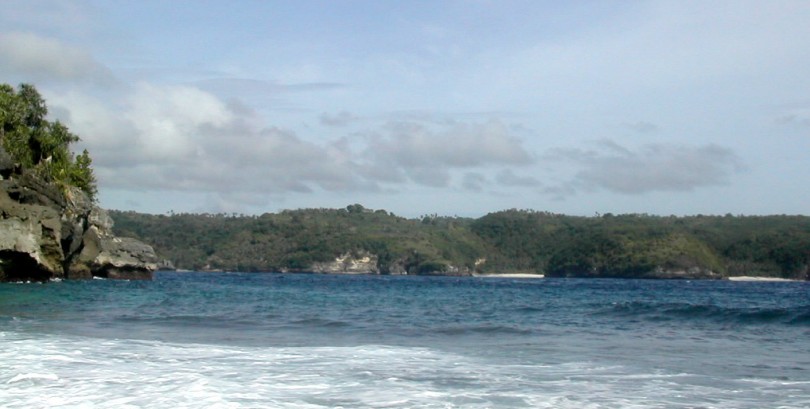 Nusa Penida is the largest of the three Nusa islands that are located southeast of Bali across the Badung Strait, at a distance of 20 km (45 minutes by boat) from Sanur. The other two Nusa islands are Nusa Ceningan and Nusa Lembongan. From an administrative point of view the Nusa islands belong to the Klungkung regency, which was the former center of the Gelgel Dynasty.

the first written records of Nusa Penida have been found on the Belanjong Pillar.  This pillar, located in South Sanur, dates from 914CE and shows inscriptions that tell us about the military expeditions of the early Balinese King Sri Dalem Wira Kesari Warmadewa, one of which was to Nusa Penida.

Over time many more military expeditions were organized to conquer Nusa Penida, however again and again the people of Nusa Penida managed to resist the power of the Kings of Bali.

In the second half of the 17th Century however, Nusa Penida was definitely conquered during a military expedition of the Gelgel dynasty led by its prime minister, Patih Jelantik. The last king of Nusa Penida, Dalem Bungkut, perished in battle.

Nusa Penida has its own Balinese dialect, which is not spoken anywhere else on Bali. The culture of Nusa Penida is in many respects unique in its kind. Typical to Nusa Penida is the unique Baris Jangkang, a grotesque and rather weird type of Baris dance. It depicts the demon army which served Dalem Bungkut, the last king of Nusa Penida, in a war against troops from the Balinese King Waturenggong of Gelgel. The dancers wear traditional red-colored clothing (kamben cepuk) from Nusa Penida and are equipped with long spears. The dance starts with clownesque figures wearing masks who explain something about the background of the war and the characters in it. Next appears the demon army, followed by their leaders, Dalem Bungkut and his war lord I Gde Mecaling. Dalem Bungkut and I Gde Mecaling dance grotesque and with a lot of maniacal laughing, speaking in a strange demon language, while the demon army dances with slow and simple movements. The Baris Jangkang is performed during Dewa Yadnya ceremonies.

Goa Karang Sari – at the east coast of Nusa Penida near Sampalan, about 4km north of Suana village, are some interesting limestone caves that are of religious and cultural importance. To reach the caves you have to do a short climb. You will need a local guide to bring you there, Do not forget to bring a flashlight.

Puncak Mundi is with its 521 metres above sea level the highest point of Nusa Penida and offers great views over the island and over the ocean. A temple stands on the top of a hill. In this area you will also find alternative energy facilities with wind turbines and solar panels.

Pura Batu Medahu and Pura Batu Kuning are interesting temples, at stunning locations on road along the east coast south of Suana. Continue on the minor road to the small village of Semaya and you will come to Pura Batu Madan first, after about 1.5 km and before you reach Semaya. Pura Dalem Peed – according to the Lontar Babad Dalem the Pura Dalem Peed was built in the 14th Century, at a time that the people of Nusa Penida revolted against the occupation of King Dalem Waturenggong of the Gelgel Dynasty. This temple is important to all Hindus of Bali. Many of them do an annual pilgramage to this temple to offer and pray for protection against illness and diseases.

South coast cliffs – The remote and secluded south coast of Nusa Penida has high and spectacular white limestone cliffs with stunning panoramas over the ocean. The roads in this area however are very bad so be prepared when you intend to go there, but it will certainly be worth your efforts once you are there. There are many birds here which makes this area a paradise for birdwatchers.\r\n

There are about 20 recognized divings sites around the island.

Toyapekeh bay has beautiful coral pillars and a strech of reefs. Here you will see big schools of fish, sea turtles and occasionally mola-mola.

Malibu Point has grey reefs with lots of sharks. The bay has strong up currents which is due to the swell coming in. Getting around at the island

Nusa Penida does not have a tourist infrastructure. The roads are in general very bad. Public transport is sparsely available along the north coast of Nusa Penisa (old bemos or on the back of a truck). It is possible to hire motorbikes at the villages of Toyapekah and Sampalan. The costs depend on your negotiation skills however you must be prepared to pay something around Rp. 100,000 per motorbike/ per day. At these villages are also some simple homestays. There is no other accommodation on the island, camping is your only alternative if you wish to explore the island for a longer period of time. You might consider bringing in a mountain bike from Bali to use as transport.