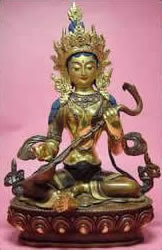 Saraswati Day is celebrated at the very last day of the Balinese Pawukon calendar, being the Saturday of its last week, Watugunung.

Dewi Saraswati is generally referred to as the goddess of ‘Science & Knowledge’.

Dewi Saraswati is connected to the Balinese god Dewa Brahma, who is the manifestation of the Almighty Infinite Spirit as the Creator.

The spiritual symbolism of Saraswati

The materialistic worldviews that dominate the modern world we live in, have caused considerable misinterpretations of the religious symbols found in Balinese Hinduism. The main reason for this is a general loss of the ability to think in ‘parallels’, to communicate in symbols and analogies. Instead, modern man tends to interpret most religious symbols literally.

Unfortunately, the true “Knowledge of Saraswati”, the knowledge of the mathematical science that defines the octaves of existence, and which rules and controls the cycles of life of all manifestations (also referred to as sacred geometry), and which enables mankind to be a true Master of his life, is not taught in our schools and universities, nor is it taught by our religious leaders.

The Secret Knowledge of Saraswati

Saraswati actually symbolizes knowledge that is based on a very simple and highly effective spiritual law, which may be referred to as the Law of Attraction.

The Law of Attraction is a scientific law, based on ‘Sacred Science’. The working and effects of this law are predictable at all times and in all circumstances. Once one understands how this law works, how its effects are generated, one will unconditionally trust in it, and as a result, there will be no more doubt and fear in one’s life. In such a situation one is able to control one’s life in a highly effective and independent way.

Saraswati’s Knowledge is based on the simple fact that one’s personal, physical reality is nothing more than a mirror of one’s beliefs, ideas, and thoughts. Each and every experience in the physical is just an effect of these, generated by the Law of Attraction. This means that if one replaces one’s beliefs and ideas for others one automatically changes the effects – one will gradually have other, new experiences that conform these newly held beliefs and ideas.

Thoughts and emotions play an important role in Balinese Hinduism. One of the basic teachings of Hinduism, ‘pikiran suci, hati murni‘ (= clear, positive thoughts and feelings), has directly to do with Saraswati and the Law of Attraction. It teaches that negative feelings are caused by pure ego-clouded, negative thoughts, ideas, and beliefs. The most prominent of these negative feelings and emotions are represented by the so-called ‘Sad Ripu’, the six ‘enemies’ of the individual – jealousy, anger, hate, greed, laziness and confusion. If one wishes to alter negative personal circumstances for positive ones, one needs to swap these sad ripu feelings and emotions for unselfish and caring feelings first.

Pulling the switch often appears to be difficult a difficult task as one is used to regard the reality one experiences not as the effect of false beliefs and ideas but rather as an unconditional fact of one’s personal life. And herein lies the challenge. Either one remains a ‘”victim of fate” or one becomes a “master of one’s life”.