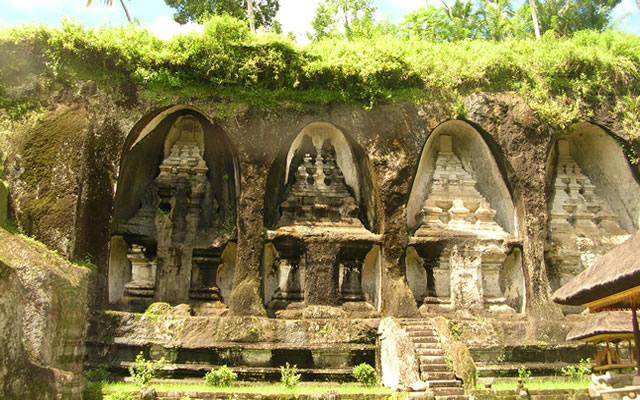 With its extraordinary, pre-Hindu candi temple complex Gunung Kawi and the holy springs of Tirta Empul, Tampaksiring still breathes the atmosphere of ancient legends and long lost tales of forgotten Balinese kings who lived in an obscure but important period of Balinese history.

The candis of Gunung Kawi

At one of the junctions of the busy main street of Tampaksiring a sign reads, “Objek Wisata Gunung Kawi”. The side street leads to a small parking, a little laid back from the main street of the village. From there a stone paved path leads down into the valley of the sacred river Pakerisan, with stunning rice field views on the way.

Before long one reaches a small stone gateway which gives access to the remarkable, ancient candi temple complex of Tampaksiring, which borders the sacred river Pakerisan. The ten candis of Gunung Kawi represent the largest and the best preserved examples of the 15 candis presently known in Bali. It’s very likely that there are more of these typical candis in Bali, buried by a succession of seismic events and landslides, awaiting discovery.

The term candi refers to the abode of Candika, Goddess of Death, and consort of Lord Siva. The rock-hewn candis are a wholly Balinese phenomenon, unknown elsewhere in the world.

However, they take their general form from the free-standing candis of East Java, which show very similar architectural forms and decorations. Also the candi constructions show strong Indic influences, as this type of extremely labor-intensive, rock-hewn construction is fairly common in India.

The candis of Gunung Kawi are believed to be constructed in the 11th century (1080 AD) by king Anak Wungsu in honor of his father, the great Balinese ruler Udayana. Contrary to what is often believed, the candis are not tombs, for they have never contained human remains or ashes.

In this respect they are rather considered to be symbolic secular accommodations to house the members of the defied royal family when they are invited down during temple festivals, similar to the rites that are still held today during the temple festivals of ‘modern’ Balinese Hinduism, as shaped by Nirartha in the 16th century.

The candis at Tampaksiring are divided into three separate sections. Four minor candis of Tampaksiring can be found at one side of the river, five major ones at the other side and, often overlooked by visiors, a tenth candi a little laid back from these major and minor clusters. There is evidence that the candis of Tampaksiring were probably once protected within two massive rock-hewn cloisters. In shape the candis resemble small buildings surmounted by massive three-tiered roofs bearing nine stylized lingam-yoni fertility symbols. Each candi actually looks like a doorway, carved in relief, but going nowhere. Instead, there is a small chamber beneath the candi, accessed by a sloping shaft from the front, in which a stone plaque (peripih) with nine holes containing symbolic offerings of food and metal objects, representing the necessities of earthly existence, was placed.

Above each doorway is a panel that bears an inscription, written in the striking quadrate script that briefly characterized East Javanese Kadiri monuments during the 11th Century. Although few decipherable remnants have survived, this provides the clearest evidence of when Gunung Kawi of Tampaksiring was constructed.

Symmetrically flanking the candis are large spaces, often divided into three sections by pillars. Some exceed eight meters in length by three meters deep, with lofty, vaulted ceilings rising to more than two and a half meters in height. Furthermore there are 34 other rock-hewn structures in the area.

Also there is evidence that provisions have been made in its construction for water to be directed towards the candis, and from there into sluices and spouts. As in Balinese Hinduism it is believed that when water has flowed over a candi it has become imbued with divine properties through contact with the essence of the resident deity, this accounts for the fact that even today Gunung Kawi of Tampaksiring remains an important source for the holy water that has always been central to Hindu Balinese rites.

Apart from the candis themselves, there are room-like structures that all share certain common features. These structures may be classified into three types. The simplest of these chambers comprises a single space. Next come similar spaces, which also have leading from them a second, closed chamber. The third category consists of in total ten chambers that are closed off by a front wall that has both a central doorway and an elongated horizontal window opening. They also have a closed chamber with a deeply incised false window niche that is symmetrically placed to match the real window. Many of the closed side chambers possess remarkably resonant acoustics, perfect for spiritual meditation intended to tune in to specific energy vibrations.

The candis of Tampaksiring however are still surrounded with mystery in respect with their actual, intentional purpose. It is very tempting to assume that at the time of their construction these structures were designed for pure spiritual purposes, as opposed to the Hindu rituals of today which are generally performed and attended for the sake of the ceremonies themselves, and its rich symbolism generally interpreted literally instead of traced back to its true, spiritual meaning.