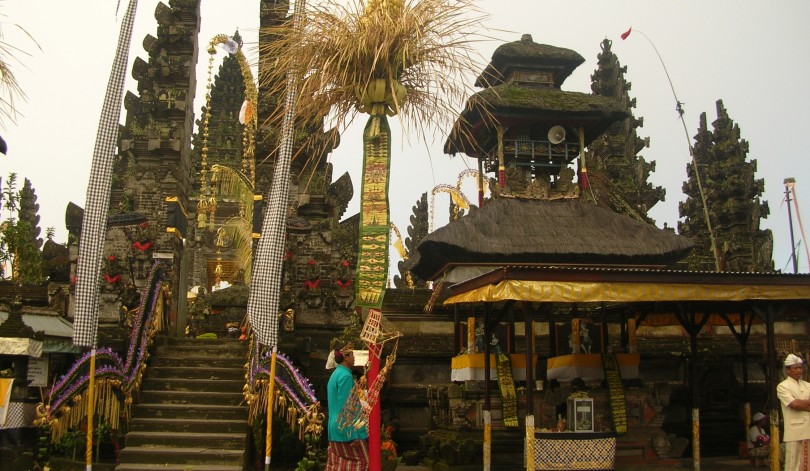 Pura Ulun Danu Batur, built in 1926, is the second most important temple complex of Bali, after the mother temple Besakih. The temple is dedicated to Dewi Batari Ulun Danu, goddess of lakes and rivers. “Ulun Danu” literally translates as “head of the lake”.

Until 1926 Pura Ulun Danu and the village of Batur were located down in the caldera, at the foot of the Batur volcano. After the volcano erupted violently in 1926, both the village and the temple were destroyed except for the most important shrine, an 11-tiered meru dedicated to Dewi Batari Ulun Danu. The villagers moved to the highest and oldest rim of the caldera where they rebuilt their village and the temple.

Actually the Pura Ulun Danu is a complex of nine different temples, containing in total 285 shrines and pavilions dedicated to the gods and goddesses of water, agriculture, holy springs, art, crafts, etc.

The following describes the major objects of the Pura Ulun Danu:

PURA PENATARAN AGUNG BATUR, the principal temple, has five main courtyards. The most dominant shrines are the meru’s, an 11-tiered one situated in the inner and most sacred courtyard, which is dedicated to the lake goddess, and three 9-tiered ones for the gods of mount Batur, mount Abang, and Ida Batara Dalem Waturenggong, the deified king of the Gelgel dynasty who ruled from 1460 to 1550. Another 3-tiered meru is for Ida Ratu Ayu Kentel Gumi who protects the crops from disease.

In the northwest corner one can find a shrine with colorful statues that is built in Chinese style and dedicated to Ida Ratu Ayu Subandar, the patron saint of commerce and the ‘administrator’ of the gods. The worshipping of this god dates from the Hindu-Javanese days in which the king used to appoint a harbor master, usually a Chinese, who was responsible for the storage and the protection of valuable objects. One of these objects, a golden belt, can be admired at the bale gedung, the building where these valuable objects were stored.

PENATARAN PURA JATI is related to the source temple on the western shore of the lake. Odalan: Sasih Kedasa (March 19, 2008).

PURA TIRTA BUNGKAH is related to the hot spring down by the lake.

PURA SAMPIAN WANGI is dedicated to such crafts as weaving, sewing, the making of offerings and ceremonial cakes.

PURA GUNARALI is where adolescent boys and girls can invoke help to develop their natural abilities.

PURA TULUK BIYU is another relocated temple. Tuluk Biyu is the old name of Abang, the second highest mountain in Bali. The temple used to be located at the southern slope beneath the summit of Mt. Abang. The temple complex also contains an original gong gede which is only played during the 11-day odalan (commemorating the foundation of the temple), when it accompanies the holy baris dance and the secular rejang dance, which is performed by women.

The odalan of Pura Ulun Danu Batur takes place each Purnama of Sasih Kedasa, the 10th full moon according to the Balinese Çaka moon calendar. This day usually falls in the month of March but sometimes in April.