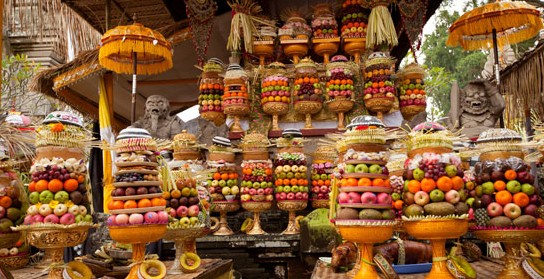 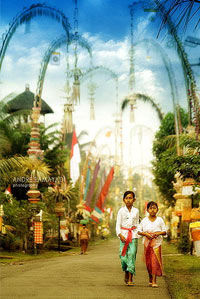 Galungan is about the victory of dharma over adharma. The series of Hindu religious ceremonies that are performed during this 10-day Festival period are generally considered to be the most important ones of Hindu Bali. During this period the followers of the Balinese Hindu Dharma religion focus on the importance of living a life based on dharma.

Preparations already start at Tumpek Uduh – 25 days before Galungan Day, at the Saturday of the 7th week of the Balinese Pawukon calendar, Wariga. The total length of the ceremony period therefore extends to 35 days (= 5 weeks, one Balinese month).

Galungan Nadi – If Galungan Day coincidences with Purnama (full moon) – similar to the first celebration which took place at Purnama, October 15, 882 AD – then the ngotonan (anniversary) of Galungan is celebrated, a special day that is blessed by Sang Hyang Ketu (Dewa Kecemerlangan). Galungan Nadi occurs about every 10 years and is celebrated in a much more solemn way than ordinary Galungan celebrations; in general, the offerings on this day will be more elaborate.

Galungan Nara Mangsa – If it coincidences with Tilem (dark moon) Sasih Kepitu (7th month of the Balinese Saka moon calendar) or Tilem Sasih Kesanga (the 9th month of the Saka calendar, which is the day before Nyepi) then it falls on a very bad day. Such days are ruled by Kala Rau – days on which the bhuta kala are very active while the dewa/dewi (gods) remain passive. The presented offerings of a Galungan Nara Mangsa will, therefore, be partly different from ordinary celebrations.

One of the main characteristics of the ceremonies period is the inner struggle between dharma and adharma, which is symbolized by the Kala-tiganing Galungan or Sang Kala Tiga who descends three times to earth to tempt mankind to adharma. The first time that this happens is three days before Galungan, at Penyekeban, in the shape of Sang Bhuta Galungan; the second time takes place the following day, at Penyajaan Galungan, in the shape of Sang Bhuta Dungulan and the third and last time happens the day before Galungan, Penampahan Galungan, as Sang Bhuta Amangkurat. 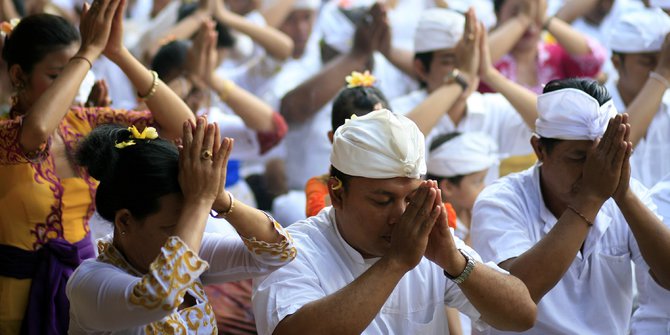 The Ngelawan ceremony of Galungan

During the Galungan festival the Hindu people of Bali usually perform a ceremony called Ngelawang which involves travelling around the village in the costume of Barong Rangda and Barong Kedengkling.\r\n+ read more about the Ngelawan ceremony\r\n

History of the Galungan celebrations

So far no records have been found which mention the origins of the Galungan celebrations. The origin of Galungan therefore still remains a mystery.

This can be translated as follows,

This commonly accepted translation (2) however is an analogy with a highly symbolic meaning.

First of all it refers to the fact that the circumstances of that day (the coincidence with Purnama and the dominant presence of highly positive cosmic energy that day) are most auspicious for cleansing oneself and becoming aware of the existence of one’s higher self who strives for a life based on dharma versus the dominant ego who strives for adharma.

Secondly it points to the fact that if the higher self would be dominant over the ego, Bali would be like the world of the gods – or rather people (mankind) would be like gods, living life as it is supposed to be, as co-creators, with the awareness of a divine (higher) consciousness.

And this is exactly the intention of Galungan, to create awareness of the duality of intentions of the higher self and the ego, and to try to reach one’s higher consciousness. If one succeeds, the higher self will be dominant over the ego and the inner battle between dharma and adharma is over.

In this respect, [a] Bangun [b] indria Buwana [c] ikang [d] Bali rajya could also be translated as follows, which is much closer to the intention of the celebrations,

The waking up of (= becoming aware of, or rising up to) one’s cosmic senses (= higher consciousness) can be realized by controlling one’s inner power.

Hereunder you will find an overview of all the specific ceremonial days of the festival, starting with Tumpek Uduh and ending with Tumpek Kuningan. You can click the names to access a detailed description of each of these ceremonies.